Bree, the inspiration for the 'Breesfalt' affix. 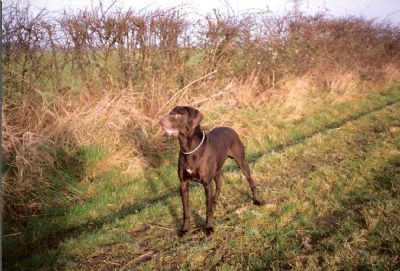 Bree was the reason I got my first Deerhound.  He was bred by my father in 1984 and was such an easy going and friendly dog.  I was showing him successfully in obedience and wanted another breed to show.  Bree was so named because at the time he was born I was reading Lord of the Rings, his father was called Strider and as there was a Strider in the book, I looked there for inspiration.  In Lord of the Rings there is the village of 'Bree' where everyone is covered in short brown hair.  Bree was a liver coloured German Shorthaired Pointer, I had found his name.

When in 1989 I decided to register an Affix we spent days arguing over possible names before coming up with 'Breesfalt'.  This was chosen because Bree always got the blame for everything, even though he never put a foot wrong his whole life.  Eddie was always saying to him "it's Bree's fault".   Our choice of affix was accepted.

Bree lived to the grand age of 18 and a half.

Pictured here is my Nan, also in the picture is Bree's dam, Clem and his litter sister, Willow.