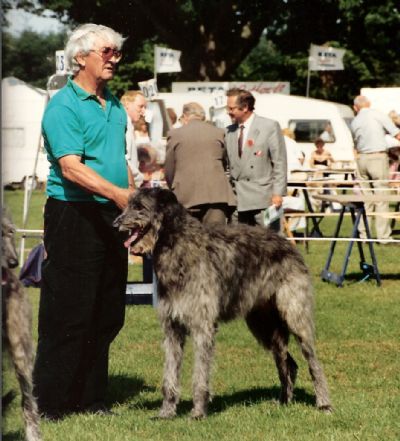 We were lucky enough to be able to call Miss Noble a friend and were very fond of many Ardkinglas hounds.  I booked a puppy from Tasia's Val/Bevis mating but there was nothing suitable for us so we waited and Ross blazed into our life.  Ross did reasonably well in the show ring, but never achieved the accolade of Garth.  A couple of people tried to use him, but unfortunately unsuccessfully.  What a character.  Ross was so naughty, with a Capital N.  Always up to mischief, so very destructive, can't remember what he went through, kitchen cabinets, doors, shoes, then one day it all stopped and he never chewed anything again.  A friend of ours stayed one night to look after the dogs and she laid her clothes on the bed prior to having a shower, when she came out her clothes were strewn everywhere, including her underclothes hanging from the light in the middle of the room.  He was another total comedian and I am sure laughed at his own antics.

Champion Lorrivale Garth and Ardkinglas Lachlan of Breesfalt, pictured with their great friend Melanie who used to spend most of her waking time with them when not at school.  Melanie is now grown up and married to Martin with children of her own, gosh how time flies.