We consider ourselves very lucky to have know Miss Noble and have shared many an evening and some great laughs.  The breed lost a great attribute and many lost a great friend when she died.   What stories she had to tell and maybe we didn't always agree on certain things but we will never lose the respect we had for this wonderful lady.  I find it sad to hear that some people now come into this breed not even bothering to research the breed and therefore not knowing the name and great contribution she made, Ardkinglas Hounds are a prominent part of our history, along with other kennels from years ago.  I remember pouring over books and pedigrees and discovering names and contributors from the past, hopefully this will continue.

We had booked a puppy from Miss Anastasia Noble from the Ch Ardkinglas Val / Ch Lancien Bevis litter.  However, when they arrived there was nothing suitable for us, Krystal being kept by Tasia.  We spent the next few years trying to twist her arm.  When she decided to use Garth on Krystal we booked a bitch, again we were thwarted, all boys.  Eventually, and following the loss of Garth, we received a phone call from Tasia offering us Krystal, of course we jumped at the chance and could not get there quick enough to pick her up. 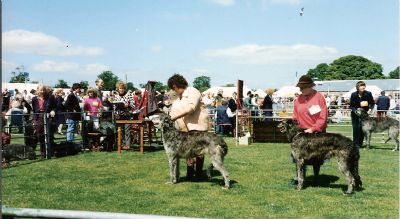 Kyrstal being placed 1st in her class, ahead of Miss Noble (Ardkinglas) and Mrs Blandford (Flaunden), Krystal went on to win the ticket.

This picture shows Krystal not long after producing our first Breesfalt litter by Ardkinglas Murdo, again I am lucky that I have her great great grandchildren here and will hopefully have many more generations.

Krystal, shown here with her "Krystallettes" she was the most wonderful mother and never wanted to leave them for any length of time.  We kept two pups, Barney and Kerry and they were all so very close right through their lives.

This is a picture sent to us by Rod Gillie of Dorrator Deerhounds.  It was taken in the early 1990's during one of his many visits to Miss Noble at Ardkinglas.  It includes a picture of Krystal, which is why he sent it to us.  Krystal is the one being hugged by Rod and he thinks the other deerhounds are possibly Ardkinglas Henrietta, Ivory and Norma.  Thanks for this Rod.