I know these pictures of the red squirrels aren't that good.  However, I will be improving them, it is quite difficult to get close enough and I have to wait in ambush, but working on that.

It knew I was there and started chattering at me and flicking his tail, but eventually he came down for the nuts. These pics are a "work in progress"  I will improve, honest.

The birds are easier to take as they fly in and out all the time.

I was actually trying to take a picture of a large boat travelling down the loch, but what with the dogs jumping at me and it moving so fast i lost it and was just left with it's wake in the water.  Lucky it wasn't the Loch Ness Monster oh no that's a different loch isn't it!

This is Bill and her babies, named after our friend Bill Hamilton, yes he is a deerhound expert, but he is first and foremost the walking encyclopaedia on chickens.  Bill (the chicken) turned up in our garden one day almost featherless and very bedraggled, despite being chased out endless times by the dogs she decided to hang around.  She was here for weeks, then one day she disappeared and we thought the fox must have eaten her, but a few days after her disappearance Eddie was strimming the bank and luckily noticed her just before she lost her head, she was sitting on a nest of eggs.  Some time later the eggs hatched and we were presented with 9 assorted chicks.  I was not allowed to keep either Bill or her babes and although there were many request for her from friends (for their freezers) I took her to a community farm in Helensburgh where hopefully they lived happily ever after.

Today is a really cold and frosty morning there is even some snow on the hills and an odd snowflake in the air.

These are views looking down and across Loch Fyne from the garden.

I am hoping the forecasted snow arrives on Tuesday as the dogs just go absolutely mad, they were bad enough running on the crunchy frozen leaves.

The Buzzard, the biggest visiter to our bird table! 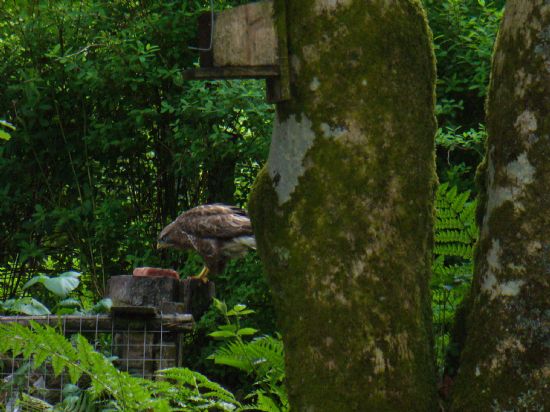 A lovely Rhododendron in full bloom, albeit slightly smaller than it used to be following Evie's assistance with the pruning. 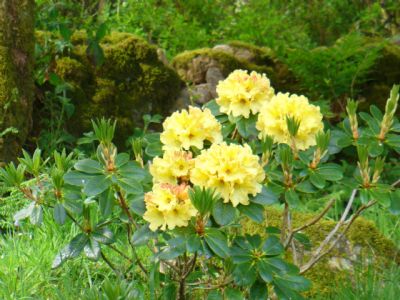