Have not touched the site for a while.  However loads of pics and videos to add.  Hopefully will get to it early in the new year.

One piece of sad news, our cat, Mindy was put tp sleep last month.  However, she was 20 bless here and had used up many of her nine lives.  She left us with her claws deep in my arm. 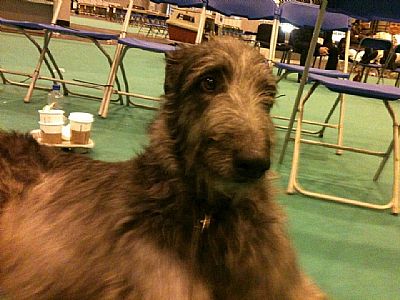 Congratulations to Betina Adams, who won the Dog CC then Best of Breed at Crufts with her Cscarf O'Cockaigne, following this up with a pull in the Hound Group. Breed judge was Mrs Anne MacDonald.  Cscarf relaxing ringside after his epic win.

Jasper was 1st in Post Graduate at Leeds Championship show.  He was in naughty mode and played up for Laura, both of them doing their best to look like they had no idea what to do, never mind, more practice with any luck before their next show - here they are proving that they do practice.  Eclipse was in season back at home so don't know if this was an encouragement for Jasper to run around with legs and tail flying everywhere.  Here is the link to the    show report  and below is a picture of Jasper and Laura "practicing"! 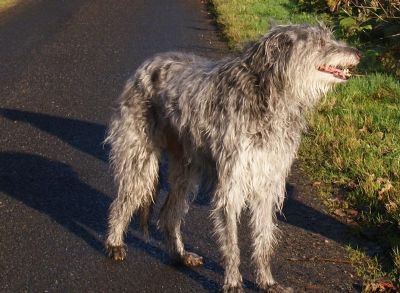 Here is a picture of Breagha (Breesfalt Tamdhu) taken a couple of weeks ago at the age of 11 1/2 years.  Her siblings, Bracken and Hamish are also fit and well.  Sadly the boy I kept, Bruich, died last year.   Kerry, their dam was 13,  when we lost her with all her siblings making it to between 11 and 13 1/2 and Krystal, their "grandma" was just over 13 1/2 so they are in good company.  They have cousins who are all well into double figures now too which is always good to hear.

We went to the Scottish Kennel Club Show, Edinburgh and met up with Brian who has one of Evies pups, Bella.  This was her first show and she was not very happy after the car journey.  Nevertheless she made a better effort at behaving in the ring than Evie did at her first show.

At The Hound Association of Scotland Ch Show,  Kelso, Laura capably showed Jasper (Breesfalt Jasper) in Junior, the judge was Angela Randall.  This is the first time Laura has shown Jasper and she was over the moon when he was placed first in his class.  Here is the link to the  show report . 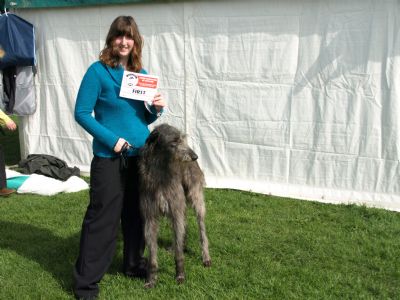 Kaz Bailey and Walter (Breesfalt Jacob) went to The Scottish Breeds Championship Show in Edinburgh today, where the judge, Sid Taylor, placed Walter 2nd in Junior and 1st in Graduate.  Here is the show report published in Dog World.  Well done the pair of you.

Crossingate German Shepherds - Sally has a litter of pups born February 2011.  I am not sure of availability now but there were 2 sable boys, 2 sable girls and 3 black and tan boys.  If you are interested then please contact sally.gunner@btinternet.com or view her website www.crossingategsd.co.uk for further information.

CONGRATULATIONS to my good pal of many years, Sally Gunner who had the very very wonderful experience of winning the Bitch CC with her German Shepherd the lovely Alice, Silkenwood Panuch, jointly owned with friends Helen and Jos.  Well deserved and about time too.  Sally and I first became friends in the early 80's, we were both interested in showing dogs and our respective bosses at the time introduced us.  We are so pleased for you - well done Sal xxxx

Today we had a very significant snowfall.  I have posted some video on Merlin and Eclipse's page of some fun in the snow.

Belated congratulations to Rob and Annette McMillan, our friends across the water in Northern Ireland.  Their lovely dog, Rhia, bred by Brian Doak has been awarded the grand title of:

What a clever girl, and of course here's to many more wins.

A friend of mine who lives near Cambridge has just had a litter of German Shepherd Dogs.  Website/contact details are:-www.crossingategsd.co.uk   sally.gunner@btinternet.com

Exciting news, Evie's litter arrived on 9th January.  Two weeks old today and so far all doing well and thriving, she is a super mum and looking after them as she should.  They are putting on weight and starting to interact with each other and their surroundings now that they have their sight and most have hearing.  More pics will follow when I get time.

The Deerhound Club Breedshow this year was held at the Dunblane Hydro Hotel and as Laura was still staying with us and she had done so well at the HAS she handled my 9 1/2 year old, Breesfalt Bruichladdich in the Veteran class for us.  She did herself proud again being placed 2nd  and Bruich received lots of praise from various quarters commenting on how well he looked for his age.  Bru does not consider himself old and as far as he is concerned acts like there is plenty of life in the old boy yet!

Unfortunately I left my camera in the room so only have a couple that Eddie took but I have been told there are some nice pictures on a couple of sites so will try and get hold of some more.

I didn't get one of Bruich in the line up so if anyone has one I would be grateful.

Laura, a friend's daughter is staying with us for a week or so and asked if she could handle the dogs at Hound Association of Scotland show for me.  I said yes but on the condition she could control the dogs and handle them properly.  We picked Laura up from Glasgow airport on Wednesday and the first thing she wanted to do was start practising.  Despite heavy rain showers and wet dogs, wet clothes etc., practise she did, I think she wore their legs down 2 or 3 inches shorter with all the running up and down.  The day of the show arrived and Laura had lots more help and advice from friends at the show, for which she thanks everyone.  Into the ring she went with Merlin for Open Dog, she stood amongst everyone else as if she had been showing dogs for years and very ably did all asked of her, being placed 4th.   Eventually it was Evie's turn in the ring and in they went, once again like a seasoned professional Laura and Evie did everything asked of them and they were placed 3rd in a large and strong class.  Laura was ecstatic with their win, even more so when someone told her she had now qualified her dog for Crufts.  Apparently it has now become her ambition to show a dog for me at Crufts, I think she may be clocking up the airmiles spending her mum's money to come up and practice.

There are more pictures of Laura showing Merlin and Evie under their respective pages.

This is a picture of the latest addition to Rob and Annette McMillen's family of Loughross hounds, Rosslyn Phoebe, aka Rhia, bred by Bryan Doak.

In the early 1990's Rob and Annette had success in the ring showing Champion Flaunden Alice Blue.   I am eternally grateful for the number of times Rob has shown our dogs in the past, being on the end of the lead for many successful wins, including when Garth won his third Challenge Certificate and I will never forget Rob running round the ring at Crufts with Krystal challenging for the ticket, she looked superb and Rob had his best trousers on too!   Rob is a superb handler and has the ability to bring out the best in any dog.

Good luck to Annette, Rob and of course Rhia, watch this space.

Yasso, the German Shepherd is visiting with Sally and Alex for a few days.  Merlin and Evie are having great fun taking turns in chasing him round the garden!

Mindy is 15 this month, can't remember which day so won't be able to get her a cake.

I love the way Swallows return to the nest for ages after they fledge.  Our Swallows fledged last Wednesday and are still returning to the nest at the end of a hard day's flying.  As I took the first picture one of the parents flew in and I managed to get the second by being in the right place at the right time.

Obviously still being fed by the parents.

I keep being asked, why do the pictures mainly include Eddie, why aren't there any of me.  Well that is because I was normally the one behind the camera.  Just to shut you up here is one of me. 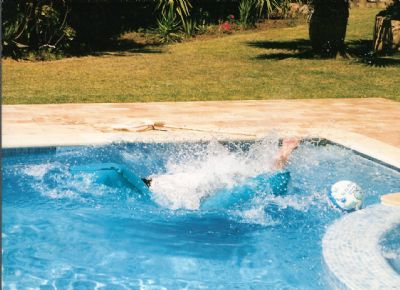 I was obviously tempting fate talking about the wonderful weather yesterday  - tonight massive thunder and lightning storm, power knocked out but luckily only for a couple of hours.

Still the wonderful weather continues, I think it has been about 5 weeks now, give or take the odd day, since the sun came out.  Long may it continue. 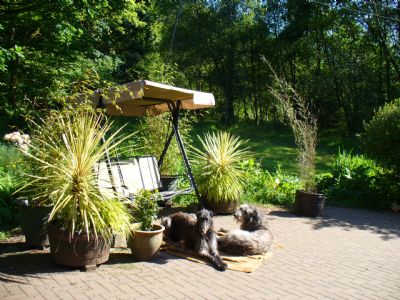 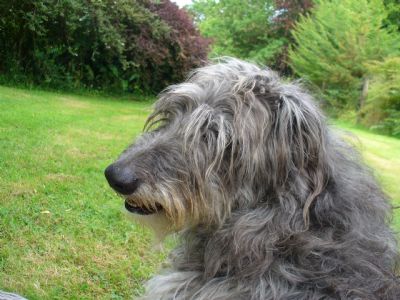 Francesca 1998 - 2008.  Towards the end of August 2007, Francesca was diagnosed with a very aggressive form of cancer and given possibly a week to live, weeks if she was lucky.  It was such a shock and difficult to take in, she was so vibrant and full of life.  The first few weeks after the diagnosis we were just waiting for her to "drop down dead", as the months went by and she carried on being fit, healthy and very active we just treasured every day with her.  Each day I felt the tumour growing bigger but she just carried on as normal with not a care in the world.  Then one day she could not keep food down, we tried a couple of things, along with our vet, in case it was not related.  In herself she was as bright as a button but obviously something was wrong.  We decided to scan her and found the cancer had at last spread to her stomach/liver and hugging her on the table I made the decision not to waken her.  I could not bring her back just to suffer for a few more days for our benefit.  My darling Francesca is no more, but her memory will live on.  There are suggestions that Metacam can slow down the spread/growth of tumours and she was on this, whether this gave her the extra nine months or whether it was just her great spirit, who knows.  At least she spent her time enjoying her life to the full and not as a poorly dog.